Confident Children out of Conflict (South Sudan) began out of a need to protect vulnerable children, by its founder Cathy Groenendijk, a Ugandan nurse who had worked in many countries across Africa for a number of aid organisations.

She came to Southern Sudan in 2006, a few years before the country gained its independence from Sudan. South Sudan is the worlds newest country but considered the poorest, it has suffered from decades of civil war and more recently internal conflict between differing tribes in a government power struggle.

The civil war has left many children orphaned and thousands displaced throughout the country, with the majority of them living in the capital Juba.

When Cathy Groenendijk went to Juba, she discovered there were many girls and boys living on the street and around the markets. She was also told many stories of young girls being abused physically and sexually, in many cases from their own family members, plus she discovered some of the girls were involved in prostitution.

Confident Children out of Conflict (South Sudan) based in Juba, has built a centre to house the most vulnerable of these girls. The girls are clothed, educated and cared for by a small number of staff. The girls all go to the local schools and invariably come top of their class and top of their year.

At the centre, the girls are given extra tuition in many subjects, including life skills for when they eventually leave the centre. They also take part in extra curricular activities, including sport and help to grow their own food in the small piece of land attached to the centre.

In recent years the centre has been home to a small number of boys, themselves displaced from their families and caught up in the country’s internal conflict.

Confident Children out of Conflict (South Sudan) also funds another 600 children across the country, to enable them to attend school. It costs around 400 South Sudanese Pounds (approx $70 US Dollars) to send one child to school for a year, plus their uniform and books. Most families in the country don’t have access to that sort of money, and if they do they usually choose one of their children to go to school and the rest would stay at home. 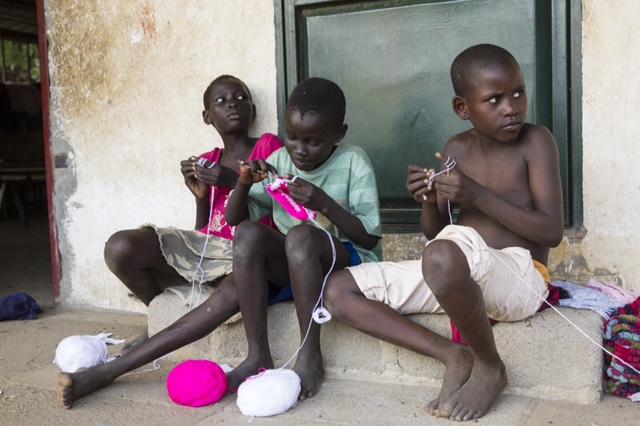 Confident Children Out of Conflict UK was set up after a number of trustees returned after spending time in South Sudan and seeing the amazing work Cathy and the other staff did, and were desperate to help her continue her great work with donations from the UK.

(Some of the children and staff with Cathy Groenendijk)